Brugada syndrome is an inherited condition with a specific abnormal heartbeat, called a Brugada sign (shown on side B in opposite image of a ECG [Echocardiogram]), which causes the lower ventricles of the heart to beat so fast that the blood cannot circulate throughout the body well. This irregular heart rhythm can cause fainting or sudden cardiac arrest — most often in healthy individuals. The Brugada syndrome is also known as SUDS (Sudden Unexplained Death Syndrome) and SADS (Sudden Adult Death Syndrome) and is most common in people of Asian ancestry (particularly men).

Approximately 20% of the cases to date of Brugada syndrome have been shown to be associated with mutations in the gene that encodes for the sodium ion channel in the cell membranes of the muscle cells of the heart (the myocytes). Scientists have found the following genes to play a role in triggering Brugada syndrome: SCN5A (which is located on the short arm of the third chromosome (3p21) and over 160 mutations of this gene have been discovered to date) and GPD1L. All of the patients studied, that had undergone a detailed autopsy upon death (due to the mutation resulting from gene SCN5A) had a right ventricular pathology. 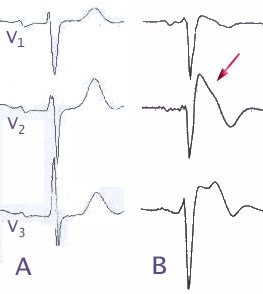 Brugada syndrome can be diagnosed with the aid of Electrocardiography (ECG) and has three different ECG patterns.