Dilated cardiomyopathy — also known as Familial Dilated Cardiomyopathy — or DCM is a genetic condition passed down from parent to child in which the heart becomes weakened and enlarged and cannot pump blood efficiently. The decreased heart function can affect the lungs, liver, and other body systems. DCM is one of the cardiomyopathies, a group of diseases that affect primarily the myocardium. During DCM a portion of the myocardium is dilated, often without any obvious cause. The left or right ventricular systolic pump function of the heart is impaired leading to progressive cardiac enlargement and hypertrophy, a process called remodeling. Dilated cardiomyopathy is also the most common form of non-ischemic cardiomyopathy. It occurs in both adults and children and more frequently in men than in women. In addition, DCM is more common in African-Americans than in Caucasians, though it can occur in any patient population.

In adults, it is most common between the ages of 20 – 60 years and causes congestive heart failure (CHF) in ~1 in 3 cases. Although in many cases no cause (etiology) is apparent, DCM is probably the result of damage to the myocardium produced by a variety of toxic, metabolic, or infectious agents. It may be due to fibrous change of the myocardium from a previous myocardial infarction (heart attack), or it may be the late sequelae of acute viral myocarditis. 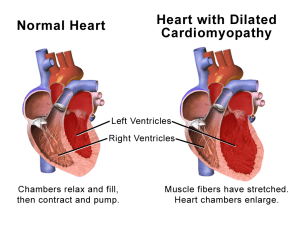 About 25–35% of patients have familial forms of the disease, with most mutations affecting genes encoding cytoskeletal proteins, while some affect other proteins involved in contraction. The disease is genetically heterogeneous, but the most common form of its transmission is an autosomal dominant pattern. Rarer forms of the transmission of this disease do exist, such as autosomal recessive, X-linked, and mitochondrial inheritance.

DCM may not cause symptoms that have a significant, if not immediate, effect on an individual’s quality of life. However, this does not mean that significant symptoms do not occur. Some such symptoms are:

Lastly, a patient suffering from DCM may have an enlarged heart with pulmonary edema, and an elevated jugular venous pressure or a low pulse pressure. Signs of mitral and tricuspid regurgitation may be present. A tachycardia with no change during the respiratory cycle may also be found.