The most common and serious feature of Marfan syndrome is dilation or widening of the aorta, which is the main blood vessel  carrying blood from the heart to the entire body. The dilation can progress until the wall of the aorta tears, a condition called aortic dissection. This is the most serious or life-threatening feature of Marfan syndrome. However, aortic dissection can be avoided by taking appropriate medicine and also with preventive surgery to replace a dilated aorta before it tears. 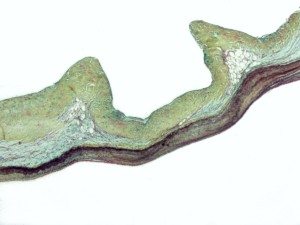 Since Marfan syndrome is partly caused by changes in growth regulation, people with the disorder can often have some of the following traits:

There is not one simple test to make a diagnosis for Marfan syndrome, so when a patient is being checked for the possibility of the condition there are a few features that need to be looked for. These features consist of observing four skeletal signs with one or more signs in another body system, such as ocular and cardiovascular in one individual, before further testing can be considered. The most common and serious feature of Marfan syndrome is the dilation or widening of the aorta, which is the main blood vessel that carries blood out of the heart to the rest of the body. Prolonged dilation can lead to aortic dissection. For a full list of features from Wikipedia’s reference site, click here.

Genetic testing can help with the diagnosis because it can look to see if the FBN1 gene has a mutation. Since this gene is hereditary, if the FBN1 mutation is found in a patient then the rest of the family should also be tested.